Valve officially reveals its ‘Steam Deck,’ a portable gaming PC that looks like a Nintendo Switch

Out of nowhere on Thursday morning, Valve officially announced its portable gaming PC, the Steam Deck, for release this December.

The existence of the new machine was leaked back in May, under the project’s working title of the “SteamPal.” The Steam Deck is effectively an all-in-one gaming PC that fits in your lap, with gamepad controls built into the unit on either side of a 7-inch, 60hz LCD touchscreen.

The system will reportedly become available for reservations on July 16. Valve plans to start shipping out units on a first-come, first-serve basis in December for $399.

The Steam Deck recalls the popular Nintendo Switch in appearance and form factor. There are several projects in the works at the moment that attempt to pack a gaming PC’s power and library into a portable, Switch-like format, many of which are crowdfunded, but it seems like Valve has beaten most of them to the punch.

Three initial reactions, on my end:

Internally, the Steam Deck runs on a new version of SteamOS, the Linux-based operating system that Valve used to run for its Steam Machine project. It also features a compatibility layer called Proton that reportedly lets users run all the games in their Steam libraries without developers needing to do any extra work for the port.

Out of the box, the Steam Deck features a custom AMD APU with a Zen 2 2.4-3.5 Ghz CPU, 16GB of RAM, and up to a 512GB high-speed solid-state drive, with a MicroSD card slot for expanded storage. Valve’s official specs for the unit claim it’ll last for two to eight hours of gameplay on a full charge.

The Deck’s got most of the control schemes packed into the unit that you could want, with four face buttons, four assignable buttons built into the grips, and L & R bumpers and triggers. The two thumbsticks both feature capacitive touch, just like the sticks on the controllers for Valve’s Index.

Other bells and whistles include a headphone jack, two square trackpads on the front of the unit below the sticks, Bluetooth compatibility, and a built-in microphone. It’s charged via a standard USB-C port on the bottom of the unit. 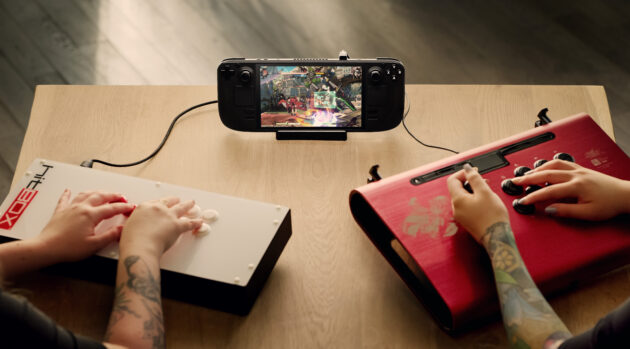 The official dock for the Deck is planned to be sold separately. It provides a vertical stand for the unit, as well as a DisplayPort 1.4, an HDMI 2.0 port, an Ethernet jack, one USB 3.1 port, and 2 USB 2.0 ports.

Valve’s stock photos of the Deck make a point of showing two modern arcade sticks being used in conjunction with the Deck’s dock, including a notoriously finicky HitBox controller. This is a very inside baseball sort of thing to show — you have to be pretty seriously into fighting games to even know what a HitBox is — which suggests Valve has gone out of its way to make the Deck compatible with obscure peripherals.

It sounds like there’s a lot crammed into the unit, and there is, but it’s also useful to remember that the Steam Deck is actually pretty big. It’s 11.7″ x 4.6″ x 1.9″ (298mm x 117mm x49mm), so it’s more like plugging a particularly beefy tablet into a controller than an old-school handheld.