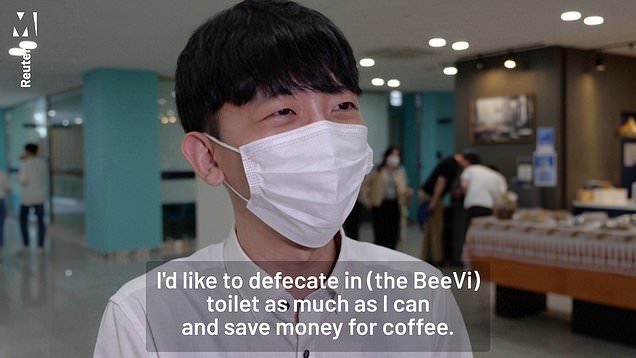 A university in South Korea has built a toilet that converts human poop into digital money.

Students can use their poo money to buy things like a coffee on campus.

What’s more, the eco-friendly toilet is helping to power a building.

The toilet was built by Cho Jae-weon, an urban and environmental engineering professor at the Ulsan National Institute of Science and Technology (UNIST).

His creation is connected to a laboratory using the excrement to produce biogas and manure.

It’s called the ‘BeeVi toilet’ and uses a vacuum pump to send faeces into an underground tank, thereby reducing water use.

In the tank, microorganisms break down the waste into methane, which becomes a source of energy for the building.

‘If we think out of the box, faeces has precious value to make energy and manure. I have put this value into ecological circulation,’ Cho said.

Now – are you ready for some poop facts?

An average person defecates about 500g a day, which can be converted to 50 litres of methane gas, according to Cho.

This gas can then be used generate 0.5kWh of electricity or, alternatively, used to drive a car for about 1.2km (0.75 miles).

Cho has devised a virtual currency called Ggool, which means honey in Korean.

Each person using the eco-friendly toilet earns 10 Ggool a day.

Students can use the currency to buy goods on campus, from freshly brewed coffee to instant cup noodles, fruits and books.

The students can pick up the products they want at a shop and scan a QR code to pay with Ggool.

‘I had only ever thought that faeces are dirty, but now it is a treasure of great value to me,’ postgraduate student Heo Hui-jin said at the Ggool market.

‘I even talk about faeces during mealtimes to think about buying any book I want.’

MORE : Kelly Clarkson once pooped in trash can during live show: ‘I destroyed it!’

MORE : Cardi B’s poop metaphor behind title of new track Up will floor you just like it did Jimmy Fallon