This basic ‘thumb-palm test’ could save your life

A simple test involving the thumb and palm of your hand could provide early warning for a dangerous medical condition.

Called an aortic aneurysm, the condition is deadly and has no symptoms.

It’s caused by an abnormal bulge in the wall of a major blood vessel and kills tens of thousands of people around the world each year.

If an an aneurysm is picked up early enough, it can be kept safe by monitoring or surgery. But most people never know they’ve got one unless it’s picked up by a scan.

‘The biggest problem in aneurysm disease is recognizing affected individuals within the general population before the aneurysm ruptures,’ explained Dr. John A. Elefteriades, a Professor of Surgery at Yale in the United States.

But Professor Elefteriades and his team say that for the last two decades, they have used the simple palm test on patients who may be carrying an aneurysm.

Here’s how it works

What’s the thinking behind it? Well, the researchers think that being able to move your thumb in that way is an indication that long bones are excessive and joints are lax.

These could be signs of connective tissue disease in the body, including the aorta. 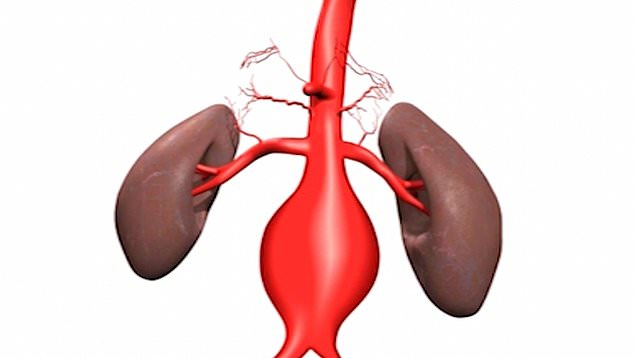 Now, although the test is carried out by the scientists and outlined in a new study published in the American Journal of Cardiology, it has never actually been evaluated in a clinical setting.

The researchers also explained that not everyone who can extend their thumb that far will is an aneurysm carrier.

What’s more – because aneurysms often take decades to get to a point where they’ll rupture – the results of the test should not be a reason to panic.

‘Our study showed that the majority of aneurysm patients do not manifest a positive thumb-palm sign, but patients who do have a positive test have a high likelihood of harboring an aneurysm,’ Elefteriades said.

The team behind the study, from the Aortic Institute at Yale New Haven Hospital recommend that the palm test be included in any standard physical examination of patients.

‘Spreading knowledge of this test may well identify silent aneurysm carriers and save lives,’ Elefteriades said.

MORE : AstraZeneca blood clot puzzle solved and scientists know how to stop it