Yoky Matsuoka has served as head of innovation at Google and as chief technology officer at Nest, and she won a prestigious MacArthur “genius” award in 2007 while a professor at the University of Washington, directing the Center for Sensorimotor Neural Engineering and the Neurobotics Laboratory.

But when she was starting to build her new venture, a personal assistant service called Yohana that launched in September, her thoughts did not immediately turn to robots or artificial intelligence.

Instead, the new service relies front and center on human assistants, who can help perform tasks such as scheduling haircuts and taking care of snacks for kids’ soccer matches.

Matsuoka said she wants to help people now, rather than later in the future.

“So when I looked at it that way, there had to be human in the equation,” said Matsuoka at the GeekWire Summit in Seattle Tuesday. It’s only behind the scenes that Yohana has put a heavy focus on developing tech tools and data repositories to support the human assistants.

“I’m not trying to lessen humans,” she said. “I’m actually trying to enhance the experience with technology.”

Yohana’s career actually began not in science but on the tennis court. As a teenager growing up in Japan, she was on track to build a career as a professional tennis player, but was sidelined by a series of injuries. “Luckily I loved math and science,” she said, “and I pivoted to build a robot for myself to play tennis against.”

She never did build that perfect tennis partner. But through graduate school at MIT she focused on robotics, pulling in studies in neuroscience. “I learned how to machine shop, I learned everything building from scratch, I learned AI — and I built a humanoid robot with arms and hands,” she said. Afterwards as an academic at Carnegie Mellon University in Pittsburgh, and at the UW, she focused on artificial intelligence, robotics, and assistive technologies. 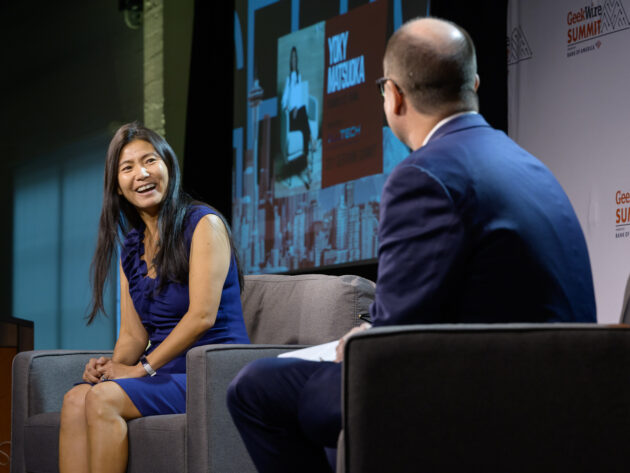 The MacArthur award, she said, was a pivot point for her. She received a call from the MacArthur Foundation the night after her mother-in-law had passed away, with an 8-day old infant in her arms. When she picked up the phone, the foundation asked, “Are you holding anything fragile in your hand?” and she said, “I actually am.” They called her a half hour later with news of the $500,000 award.

“I’m a girl who grew up in Japan, pivoted to technology a little bit late, and I always felt a little bit insecure about myself,” she said. “But this award allowed me to say actually, some people like me OK. So I can lean in a little bit further, maybe I can say a little bit more, maybe I can create more things, and I should be confident.”

When Silicon Valley came calling, she was ready. “I was building robots to help people with physical and neurological disorders. But I wasn’t doing it for them right now. I was writing papers, I was writing grants, and painting a picture of the future, and it didn’t feel right. I just had this itch that I couldn’t scratch,” she said.

At Google, she co-founded Google X, the company’s research and development lab. Later she served in a senior executive role at Apple and was CEO of Quanttus, a wearable health technology startup, in addition to her work at Nest. Most recently she served a vice president at Google’s healthcare organization, before founding Yohana and taking on the CEO role last spring.

Yohana is a U.S. subsidiary of the Japanese company Panasonic, where Matsuoka is a managing executive officer. “Panasonic started off with a founder who wanted to really change happiness of people,” with products such as washing machines, said Matsuoka of the more than 100-year old company. The idea was “to give extra time for women, so that they can do something that they want.” That core mission fit with that of Yohana, which aims to make people’s lives easier.

Matsuoka’s experience during the pandemic with children at home also accelerated interest in the idea for Yohana. She knew parents around the world were experiencing similar struggles. “A lot of things that were already happening for busy families got amplified, it became just impossible,” she said.

She leveraged her previous experiences to generate a company with a culture and outlook that is both innovative and scalable. “When I was at a large company, I knew that I could achieve scale, but things move really slowly,” she said.

Matsuoka also talked about her foundation to help children with learning differences, her work at Apple and Google and launching her new company in Seattle during a pandemic. Some other highlights from her GeekWire Summit session: