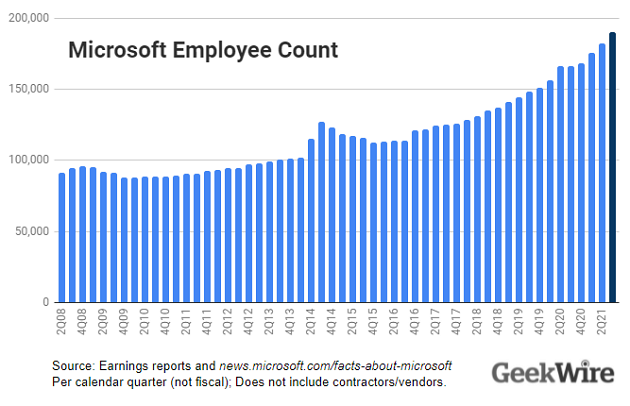 Microsoft’s global employee count grew to nearly 190,000 people at the end of the September quarter, a net increase of 23,500 people globally over the past year, or 14% year-over-year growth.

The new numbers, disclosed by the company Tuesday in conjunction with its quarterly earnings report, represent the largest annual employment growth in Microsoft’s history, except for its 2014 acquisition of Nokia’s Devices & Services business, according to historical data compiled by GeekWire from Microsoft’s public reports over the past decade.

The growth during the past year came despite the global pandemic and a tight labor market that has impacted hiring for many companies.

Microsoft has more than doubled in size over the past decade, from about 90,000 employees in 2011 to 189,984 as of Sept. 30 of this year. With that growth, the overall proportion of Microsoft employees dedicated to operations has increased, and the percentage in research and development has decreased.

Microsoft’s publicly disclosed employment numbers do not include people who work on projects for the company on a contract basis or through outside vendors, a large additional workforce that has historically numbered in the tens of thousands.

The latest year-over-year growth numbers include Microsoft’s $7.5 billion acquisition of ZeniMax Media, the Maryland-based holding company for the video game publisher Bethesda Softworks, completed in March of this year. ZeniMax had about 2,300 employees at the time the deal was announced.

The latest numbers do not include employees from Microsoft’s pending acquisition of Nuance Communications for $19.7 billion. Massachusetts-based Nuance had more than 7,000 employees as of last year. That acquisition is slated to close by the end of the December quarter or early next calendar year, Microsoft Chief Financial Officer Amy Hood told analysts on a conference call following the earnings report.

By comparison, Microsoft’s $7 billion acquisition of Nokia’s smartphone business in 2014 added about 25,000 employees, many of them in international markets, temporarily giving Microsoft a larger overall employee base outside of the U.S., until many of those jobs were cut in a subsequent restructuring.