‘Life is an illusion’: Reddit stunned by football’s virtual advertising 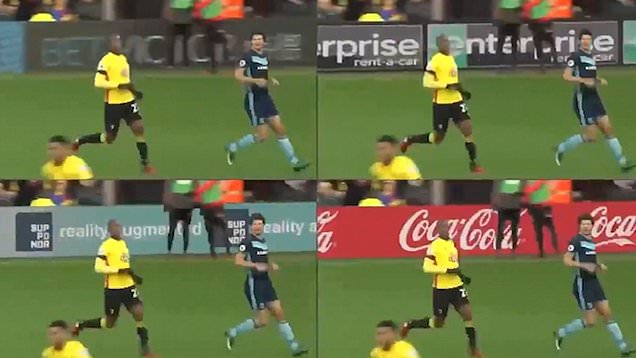 Rather than discussing the results or the players involved in a football match, a whole host of Redditors are talking about the advertising.

Specifically, dynamic virtual advertising appearing around the edge of the pitch that changes depending on your geography and which channel you’re watching.

The subtle tech has actually been around since 2018, but a recent posting highlighting it on Reddit received 134k upvotes and over 3.4k comments.

‘I work for a Dutch television broadcast company and we are testing this at the very moment,’ one commenter wrote.

‘The LED boarding is running on 200fps with every 4th frame one add. We take multiple channels from a camera since tvs in Europe run at 50fps, and so we can make 4 different feeds with the same content, different ads.’

Someone else simply wrote: ‘Life is just an illusion. Edit: and marketing’.

A similar tweet showing the video picked up over 5,000 views as people puzzled over the technology.

The technology highlighted in the post, and in the video above, comes from Supponor, a company founded in Finland that now operates out of London.

‘Virtual advertising allows an alternative advertising message to be displayed during broadcast. The new ad is virtually inserted in the broadcast feed in such a precise manner that the television audience has no idea that they are seeing something different than the fans on-site. Kind of like those virtual Zoom backgrounds, but exponentially more realistic,’ explains Massimo Magri, the company’s EU Commercial Officer.

‘The new advert shows up only to the targeted audience and the virtual technology ensures a clear, reliable image regardless of weather conditions or fancy footwork.’

MORE : Cookie-blocking browser Gener8 will pay you for seeing adverts

MORE : Fast food adverts to be banned on TV before 9pm