Junior Geek of the Month: Take stock in Vineel Bhat, who teaches other teens about investing 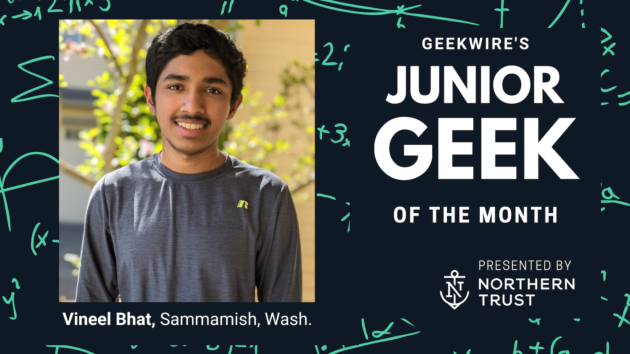 At the age of 8, Vineel Bhat was already thinking about retirement. Not that he was trying to rush things along before he even knew what he wanted to do for a living — Vineel had simply developed an early interest in business and investing.

He even went so far as to write a letter to business magnate and celebrated investor Warren Buffett back in 2014, asking for advice after watching Buffett’s animated series, “Secret Millionaire’s Club.” Vineel received a reply from a rep in Buffett’s Berkshire Hathaway offices stressing that Buffett believed the secrets to success were a good education and developing the right habits.

“You are at the time when you can do both, and he is sure that you will,” the letter informed Vineel on behalf of Buffett.

And Vineel has indeed followed the advice, becoming an entrepreneur as a young boy who is interested in sharing investment knowledge with his peers and anyone else who might need pointers on how to establish financial security.

A soon-to-be 16-year-old junior at Eastlake High School in Sammamish, Wa., Vineel is GeekWire’s Junior Geek of the Month for June. The monthly honor, presented by Northern Trust, recognizes talented young scholars, innovators, creators and entrepreneurs in the Pacific Northwest.

“I was definitely influenced at a young age about financial literacy and the importance of investing, because my dad kind of got a late start,” Vineel said. “From there it was something that just stuck with me; very quickly I became passionate about the subject and just took it from there.”

Along with seeking the advice of the billionaire Buffett, Vineel spent a lot of time studying online sources and honing his investment knowledge. He rattles off advice now like a kid who is wise beyond the years when most teens are simply thinking about a first paycheck.

In the 8th grade, Vineel did an in-person investing class for teenagers at his local library. He repeated that in 2020 with 10 weeks of online instruction, and he also started an investment club at his high school.

He started his own company last year called Invessential, which aims to teach people the essential concepts and strategies needed to build wealth, become financially independent and retire early. He blogs about his passion and built a free iOS app. He’s now offering video lessons that are pre-recorded so he can reach even more people with his on-demand financial instruction — for $99.

His previous course allowed him to donate $1,500 worth of his profits to World Wildlife Fund, and he plans to do that again this summer with 20% of what he brings in, while also adding a couple COVID-19-related charities. He’s passionate about WWF because he thinks “everyone can get behind helping our wildlife, our oceans, our forests — sustainability for the future.”

“Most people don’t know about investing, but they’re definitely interested in investing as a concept,” Vineel said, adding that most apprehension he encounters is rooted in the belief that you need a lot of money to get started and that many people are afraid of losing all of their money.

“If you’re investing in a broad index fund like the S&P 500, there’s pretty much no way that you can lose all your money,” he said. “You don’t have to be rich with investing to build wealth over time. Even with small amounts, like maybe $5,000 or $10,000 you can gain a large amount of wealth over time.”

Alongside his interest in money management, Vineel is also passionate about computer science, thanks to his software engineer parents. He said he might actually take that path in his ongoing education.

Smart money is on Vineel succeeding in whatever he takes on.

“I’m certainly not a full-time, big guy in finance,” he said. “I spend a good portion of the day looking at stocks. I personally do have a portfolio which I manage. I do look at the markets every day. It’s something that definitely interests me.”

GeekWire will feature a new Junior Geek of the Month in profiles meant to capture how they are looking to make a positive impact on the world through their geeky pursuits. In addition, they’ll receive special recognition from our project partner, Northern Trust.

Do you know an exceptional Junior Geek between the ages of 12 to 20 who is going to change the world? Submit a nomination.

Nominees must be residents of the Pacific Northwest, and parental information must be included for those nominees under the age of 18. Jr. Geeks may nominate themselves but please be sure to include your parent or guardian’s contact information.

Read about our previous Junior Geek of the Month winners.