Amazon’s profits plunged to $3.2 billion in the third quarter, dropping by nearly half year-over-year, and CEO Andy Jassy told shareholders to brace for more of the same in the critical holiday season.

“In the fourth quarter, we expect to incur several billion dollars of additional costs in our Consumer business as we manage through labor supply shortages, increased wage costs, global supply chain issues, and increased freight and shipping costs—all while doing whatever it takes to minimize the impact on customers and selling partners this holiday season,” Jassy said in Amazon’s earnings release.

He added, “It’ll be expensive for us in the short term, but it’s the right prioritization for our customers and partners.”

For the third quarter, Amazon posted earnings of $6.12 per share, well below Wall Street’s expectations of $8.92 per share, and down from $12.37 per share a year ago. Net sales rose 15% to $110.8 billion, toward the high end of the company’s prior guidance, missing analyst expectations of $111.6 billion.

For the first time in Amazon’s history, the company’s revenue from online and physical retail store sales represented less than 50% of its overall revenue for the quarter, due to steady increases in areas such as its Amazon Web Services cloud business and revenue from advertising. 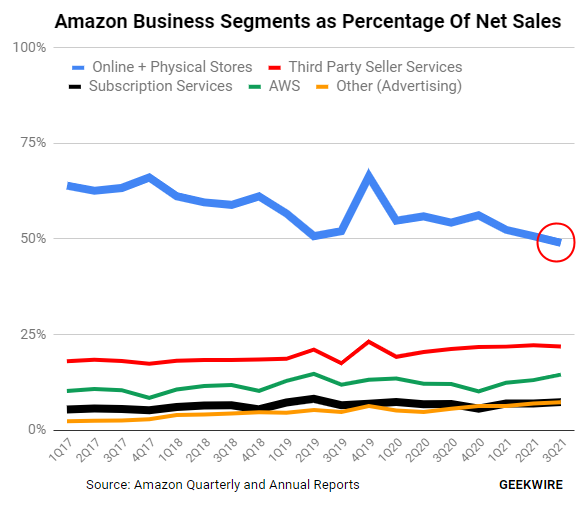 For the fourth quarter, Amazon is projecting net sales between $130 billion and $140 billion, or an increase of 4% to 12% from a year earlier. Operating income will be between $0 (break even) and $3 billion, the company says.