Amazon President and CEO Andy Jassy admitted his company’s relationship with Seattle political leaders has become rocky over recent history, but added that he hopes it can improve in the years to come.

Jassy, speaking Tuesday at the GeekWire Summit, said the online retail giant and the city council need to move beyond scapegoating and back to the collaborative culture that defined the company’s first 20 years in Seattle which saw the transformation of both South Lake Union and the tech sector as a whole.

“I think our relationship with Seattle had ups and downs, frankly,” Jassy said while being interviewed by GeekWire co-founder Todd Bishop. “I think the first 20ish years (was) pretty collaborative. We decided to build a downtown campus. (The city) was very supportive and solicitous.”

But then, five years ago, the mood changed, he said.

“The City Council has become less enamored with business or with Amazon,” he said. “It’s just been rougher.” 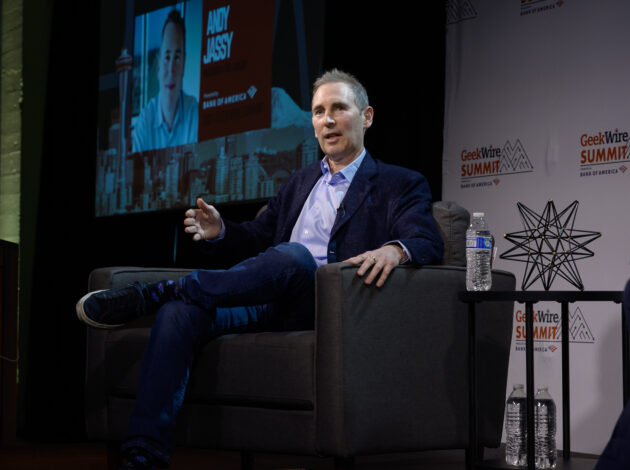 That rough period coincided with rapid and sometimes painful growth in Seattle as incomes and rent soared and expensive new developments made space for new businesses while crowding out and pricing out renters, homeowners and small businesses.

The issue came to a head four years ago with the council-approved head tax which while not limited to Amazon, specifically targeted the largest local companies with a per-employee tax in an effort to help the city raise tens of millions of dollars to pay for the effects of explosive growth.

Ultimately, the city rescinded the tax vote but the damage to the relationship had been done. And Amazon’s subsequent forays into city politics and elections were met with stiff opposition.

The episode underscored Amazon’s search for a friendlier business climate as part of its so-called HQ2 search. And while the search extended around the country, it ended up in part just around the corner in nearby Bellevue, Wash., where it plans to employ 25,000 people — the same amount it expects to hire in Northern Virginia, or its “HQ2.”

We reached out to Seattle mayoral candidates Lorena Gonzalez and Bruce Harrell for comment and will update this story when we hear back.